We are a premium event planning agency and consultancy. We provide top-notch conception, planning, implementation, and evaluation services.

Events of the future will still take place in-person, be held in hybrid form, or go fully digital. No matter the format, we as a full-service provider will find the best approach for our clients. Always with quantifiable results.

Event General Contractor
As your main events contractor, we take charge of the entire project from the first idea through to the refined concept, planning, implementation, and evaluation of any kind of event under the sun. Throughout the process, we source, manage, and take charge of every facet, delivering true 360-degree full event service all under one roof.

Events & Conferences
Whether it’s a company conference, public event, or consumer event: we are right at home in the beauty & lifestyle, FMCG, insurance & banking, industrial, retail & business industries and organize a wide array of events with the help of our specialist teams.

Omnichannel-Events
IN-PERSON, DIGITAL, and VIRTUAL are the building blocks of classic events. Omnichannel events don’t merely take advantage of these formats: they seamlessly meld them into a single event – free of the restrictions of discipline, medium, channel, and time. With effective coverage across all channels.

Shows & Staging
We choreograph, orchestrate, and stage. Whether it’s products, campaigns, people, or brands: whenever emotions and your “grand appearance” are involved, our specialist teams will ensure maximal omnichannel PR impact.

Roadshows, temporary buildings & trade fairs
In-person experiences make brands and their messages enduringly unforgettable. Whether it’s at trade fairs, pop-up spaces in brand stores, or through temporary setups. From the idea through to approval and full-service implementation, we are the perfect partner.

Promotions
Our in-person communication services are complemented by the work of our colleagues from B+D Promotions. Staff-supported promotions in combination with in-person measures at all touch points have been at the core of our services here for four decades. 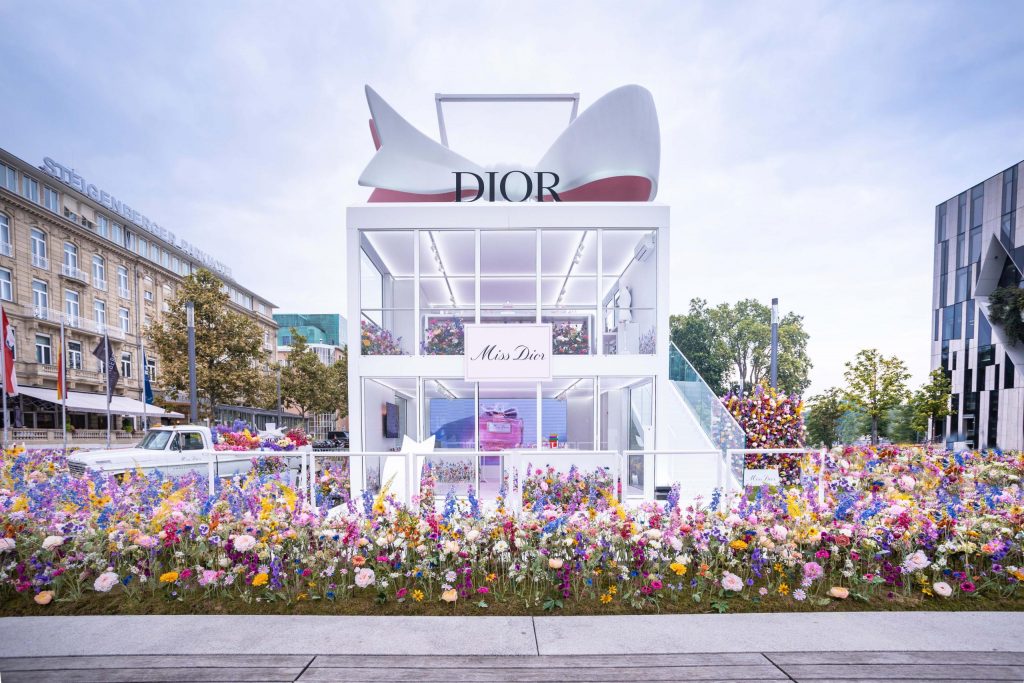 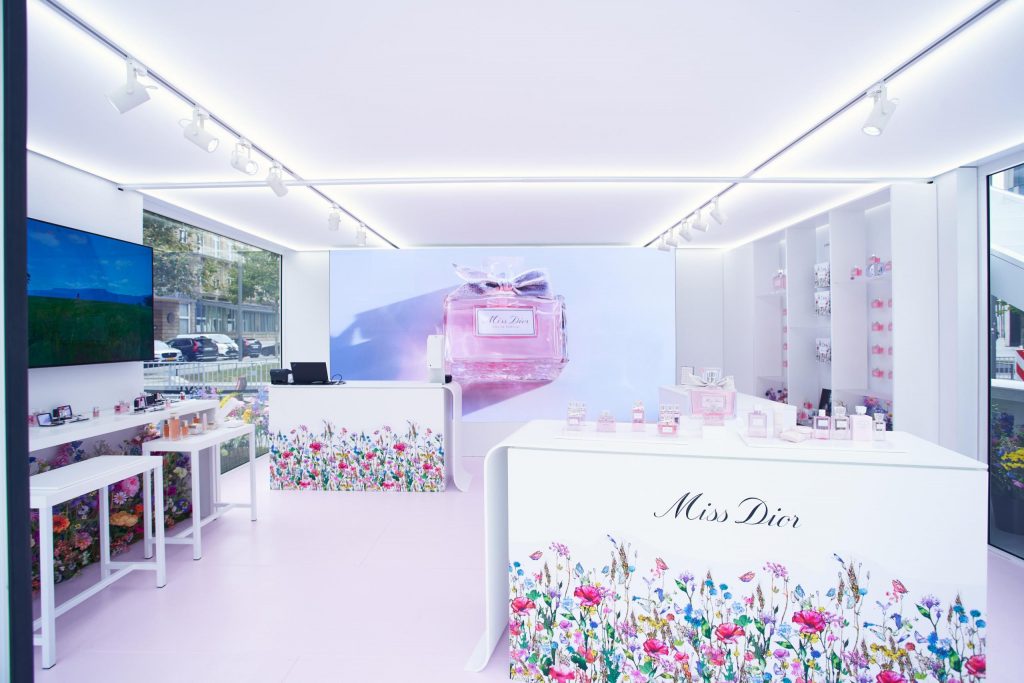 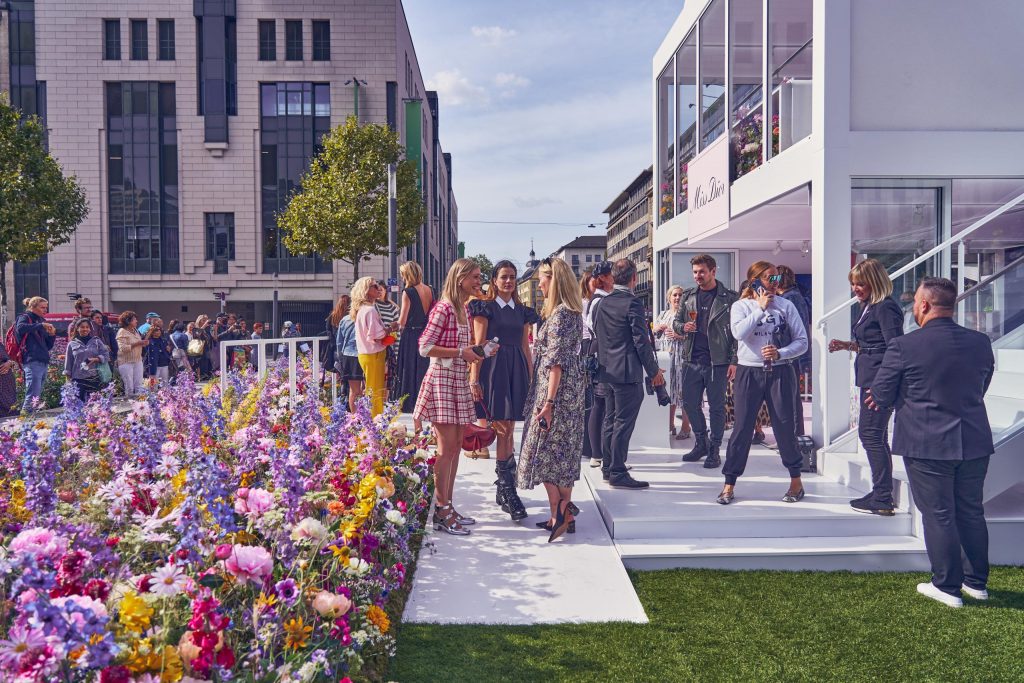 The new release of world-renowned signature fragrance Miss Dior must be stylishly and captivatingly presented to achieve the maximum range of influence. The campaign aimed to inform VIPs, consumers, distribution partners, and the greater public through all available channels – in the most emotional way possible.

A pop-up store in the middle of the Kö, Düsseldorf’s luxury shopping street. A multitude of events held there and in the surrounding area. Influencers, VIPs, press, distribution partners, customers – everyone experiences, at various different times, the messages and characteristics of the brand that mean the most to them. Consumers can book their exclusive fragrance experience online over the course of almost three weeks and immerse themselves deep in the world of Maison Dior. A true omnichannel project that, in the pandemic era, captivates and impresses the trade press, popular media, and social media. A sophisticated celebrity event strategy with top names, some of which have never made an appearance in Germany, capture the interest of TV and print media.

Outstanding influence in all media. Within the campaign time frame, nearly every consumer interested in fashion and fragrances had heard of the project and seen it. The new fragrance quickly sells out thanks to the sales. It doesn’t get better than that. 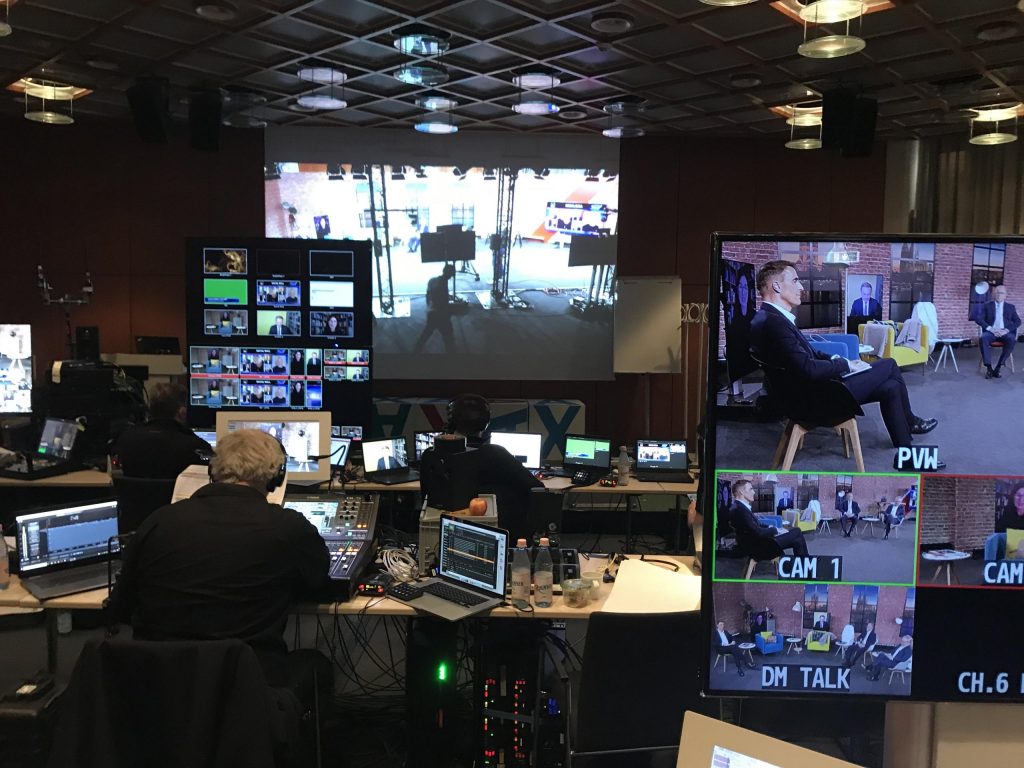 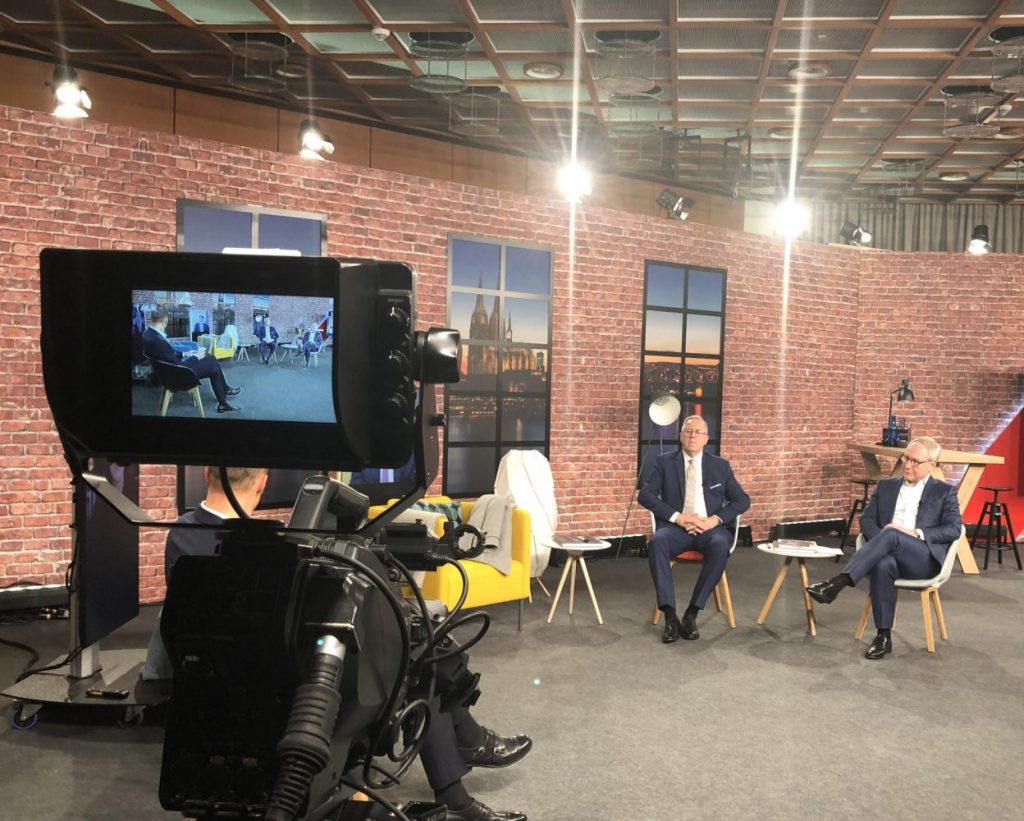 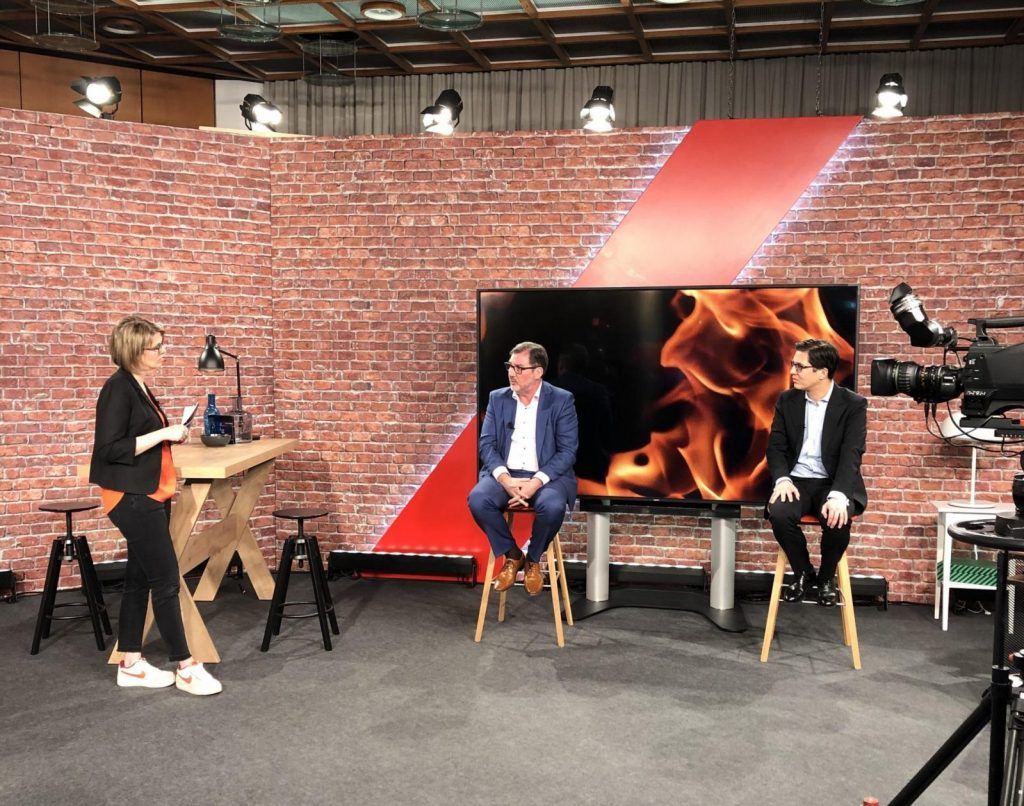 Actual skilled broker roadshows for big insurance companies, during which guests from politics, business, and associations engage in discussions in-person and invite others to participate must be rethought and implemented with a hybrid event model. All the same, participants still have to be reached, their interest aroused, and their attention held by the content on the screen.

A proprietary logo, a proprietary AXA TV streaming studio, exciting tools for participation and interaction, live streaming: these are the components of the concept, which was designed to be like a deluxe late night talk show. Participants are empowered to participate in the selection of individual details and questions – making it a truly hybrid event.

Nearly devoid of no-shows, the feared disaffection from the new digital format is nowhere to be found. On the contrary: when live streaming is skillfully interwoven with in-person and prerecorded content, the new talks and formats may even seem more lively and possess greater staying power than previous roadshows. 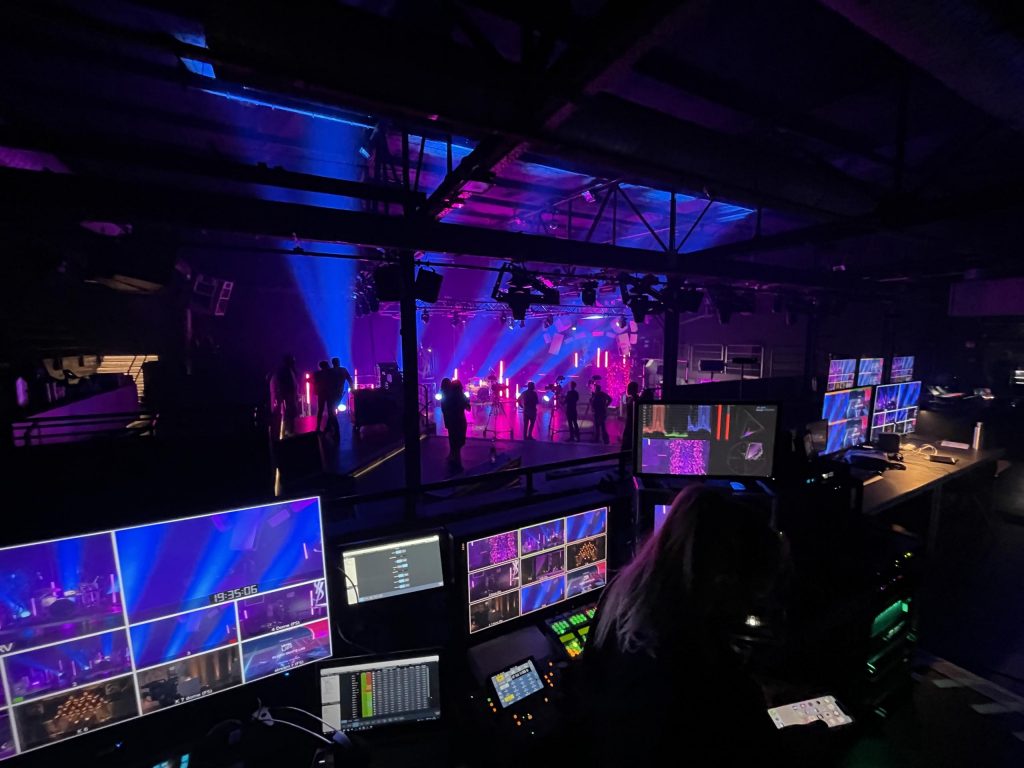 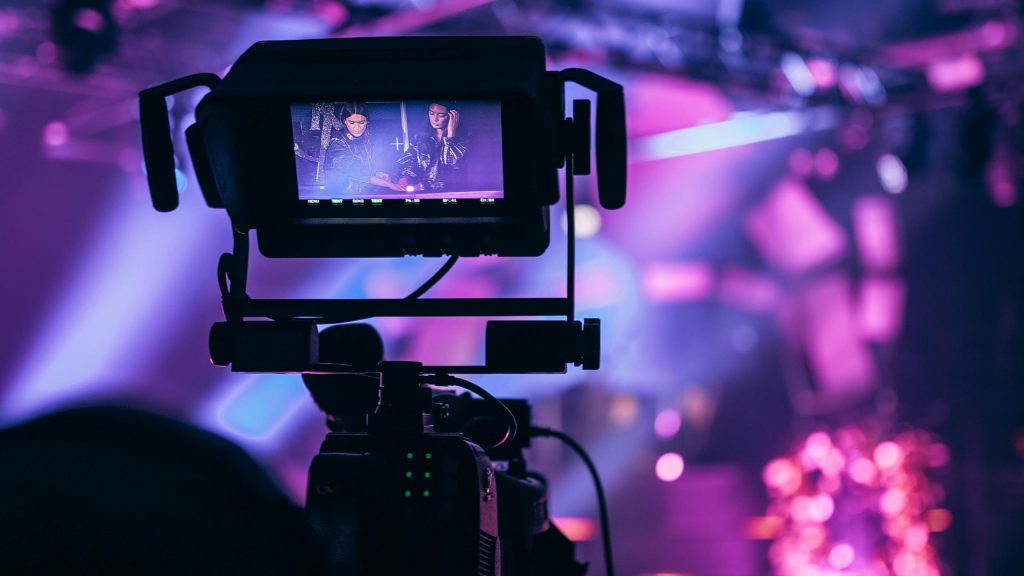 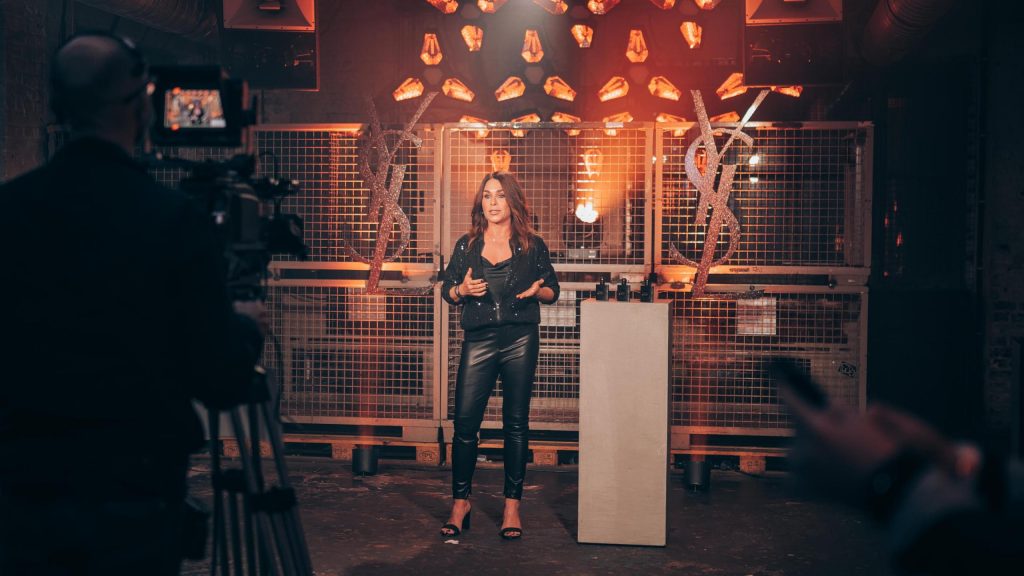 Present new fragrances on the luxury market in an eye-catching way and effectively anchor them – for a B2B target group that has previously been spoiled with year-long best-in-class in-person events. How are you going to top an in-person roadshow that was one of the most popular shows in the industry?

A hybrid event, or more specifically, a virtual show of superlatives, will have thousands of distribution partners nationwide glued to their screens. Prerecorded content, live elements, and countless interactive elements are mixed together to create a hip and entertaining live digital show. Watch, participate, and cheer on is the slogan here.

Nearly all viewers stay at their screens, on their phones, or at their laptops for almost two hours following “Level Up – The Next Generation of YSL Events.” Workshop, talk show, presentation – boundaries dissolve and it is bearing fruit. Participating in events of various formats for the brand remains very desirable, even for digital events. 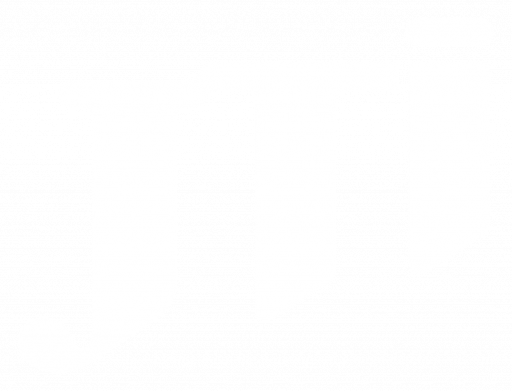 We believe in engaging people through heterogeneity, since diversity takes into account many different perspectives and impulses that form an important aspect of team interactions and creative processes. This approach is paired with the power of openness, transparency, respect, and tolerance

WWe foster collaborative interactions on an even playing field: With people within our agency, with partners, with our service providers, and also with our customers. We are team players and are passionate about what we do each day to effectively and sustainably bring people and brands together. This has allowed us to foster respectful, transparent relationships with colleagues and customers that often last many years.

To bolster our team, we are looking for a (junior/senior) event manager interested in creating the “events of the future”. Here, we call these omnichannel events. Concept, planning, budgeting, implementation, and evaluation: We take care of everything under one roof, laying the groundwork for an exciting daily routine in which we bring people and brands together. Curious? Then apply now.